Dominic Ali
Writer & Non-Profit Communications Consultant
I produce a range of materials for organizations that are making the world a better place. I’m also the author of the award-winning children’s book Media Madness: An Insider’s Guide to Media. If I can assist your organization with its communications or content needs, get in touch! 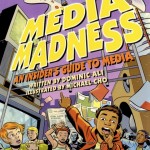 Mad about media
Media Madness is my award-winning kids’ book that takes readers behind-the-scenes to show how TV shows, magazines, video games, and CDs are produced. The book is packed with illustrations by artist Michael Cho. (Published by Kids Can Press.)

Current projects
I’m working on a comedic 70,000-word young adult novel chronicling the misadventures of 17-year-old Andrew, the child of Caribbean immigrants. When Andrew lands a summer job in his ancestral homeland as a local newspaper reporter, he arrives with two simple goals: fun and a little lovin’. But to fulfill his quest he must survive several culture shocks, adjust to his eccentric newsroom colleagues, and tame his ferocious 73-year-old grandmother. Along the way he also discovers something he didn’t expect: himself.